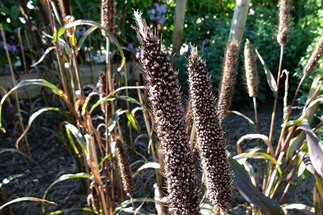 Sorghum is an excellent substitute for wheat flour, and sorghum flour makes a great baking ingredient for anyone who cannot tolerate gluten. While the protein gluten can cause digestive and other health issues for many people — including bloating, diarrhea, constipation, fatigue, headaches and other symptoms — gluten-free sorghum flour tends to be easier to digest and tolerate.

Aside from avoiding gluten, there’s another important benefit to using sorghum flour over wheat flour and certain gluten-free blends: avoiding genetically modified ingredients (GMOs). Unlike corn and some wheat crops, sorghum grains are grown from traditional hybrid seeds that combine several types of sorghum grasses. This is a natural method that has been used for centuries and does not require biotechnology, making it nontransgenic (non-GMO food) that doesn’t come with the same risks. Why is this an important point? Genetically

One of the biggest benefits of eating whole grains is that they retain all of their dietary fiber, unlike refined grains that are processed to remove parts like their bran and germ. Sorghum actually doesn’t have an inedible hull like some other grains, so even its outer

layers commonly are eaten. This means it supplies even more fiber, in addition to many other crucial nutrients, and has a lower glycemic index.

High-fiber foods are important for digestive, hormonal and cardiovascular health. The high fiber content of sorghum flour also makes it “stick to your ribs” longer than some other refined flours or flour substitutes, so you experience less of a “crash” after eatingrecipes made with sorghum.

There are several types of sorghum plants, some of which are high in antioxidants that are tied to reduced risks of developing cancer, diabetes, heart disease and some neurological diseases. Antioxidants are found in anti-inflammatory foods, and they help scavenge free

radicals that, when left uncontrolled, can lead to inflammation, aging and various illnesses. Sorghum is a rich source of various phytochemicals, including tannins, phenolic acids, anthocyanins, phytosterols and policosanols — which means sorghum and sorghum flour

might offer similar health benefits as eating whole foods such as fruits.

A 2004 study published in the Journal of Argicultural Food Chemistry found that anthocyanin antioxidants are present in black, brown and red sorghum grains. (3) Antioxidant activity and pH stability were found in sorghum at levels three to four times higher than certain

other whole grains. Black sorghum is especially considered a high-antioxidant food and had the highest anthocyanin content of all in the study. Sorghum grains also have a natural, waxy layer that surrounds the grain and contains protective plant compounds, such as the type called policosanol, which research suggests has positive implications for cardiac health. (4) Policosanols have shown cholesterol-lowering potential in human studies, sometimes even comparable to that of statins! The policosanol present in sorghum flour makes it a potential cholesterol-lowering food.

Other research shows great potential for phenolic compounds found in sorghum to help witharterial health, fighting diabetes and even preventing cancer. Mainly located in the branfraction, phenolics result in the plant having substantial antioxidant properties and non-enzymatic processes that help fight pathogenesis at the root of many diabetic complicationsand cell mutations.

Because sorghum flour is low on the glycemic index, plus high in starch, fiber and protein, it takes longer than other similar refined-grain products to digest. This slows down the rate at which glucose (sugar) is released into the bloodstream, which is particularly helpful for anyone with blood sugar issues such as diabetes. Sorghum also helps fill you up and prevents spikes and dips in blood sugar levels that can lead to moodiness, fatigue, cravings and overeating.

Impressively, certain varieties of sorghum brans that have a high phenolic content and high antioxidant status have been shown to inhibit protein glycation, which suggests that they can affect critical biological processes that are important in diabetes and insulin

resistance. (5) One study conducted by the Department of Pharmaceutical and Biomedical Sciences at the University of Georgia suggests a pharmaceutical rationale for human consumption of sorghum as a natural way to lower diabetes incidences through better control over glycation and other diabetes risk factors.

Eating a whole foods-based diet that is high in available phytochemicals is consistently linked to better protection from common nutrition-related diseases including cancer, cardiovascular disease and obesity. So it’s no surprise that epidemiological evidence suggests that sorghum consumption reduces the risk of certain types of cancer in humans compared to other cereals. (6) The high concentration of anti-inflammatory petrochemical antioxidants in sorghum are partly responsible, as is the high fiber and plant-based

protein content, all of which make it a potential cancer natural remedy.

Sorghum contains tannins that are widely reported to reduce caloric availability and can help fight obesity, weight gain and metabolic complications. Sorghum phytochemicals also help promote cardiovascular health, which is critical considering that cardiovasculardisease is currently the leading killer in the U.S. and “developed world” in general!